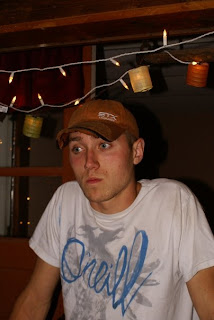 Birthdays become an interesting event after a child dies - at least they have been for me. I had thought that it would be Austin's birthday that would be the most difficult, that would weigh heaviest on my heart. I thought it would be on that day that I would be reminded of what was to never be any more. Interesting thing, that's not how it has been for me.

We have remembered Austin's birthday twice since he left us and both times my thoughts tended to go to the day he was born, remembering him as a precious, chubby baby with black hair and blue eyes. I'd smile as I thought how he grew up to be a lean, dirty blond, blue eyed boy with the same charm he came into this world with. As I posted on Austin's last birthday, I will always wonder who he'd be today - what mischief he'd be up to, what his next adventure would be, what next project he'd be working on. They have been bittersweet memories and thoughts, but not as hard as I had anticipated.

This past January and February both of my other boys celebrated their birthdays, one turned 14, the other 12. Interestingly, these were the difficult birthdays. I remember thinking both days, "I need to make sure I make today special, even though my heart is heavy. It is not fair to the birthday boy for me to be sad on this important day, a day both boys look forward to all year - the day one turns a year older." So, I would focus on making sure their birthday was special, never letting them know where my mind and heart was. (I should point out that we have never been ones to do real big celebrations on birthdays - usually it consists of a couple presents, a cake, and a dinner out the restaurant of their choice. Some years we have even postponed the dinner portion to another day, due to sport's practice or Mike's being out of town. which actually works to the birthday boy's favor, as he gets to stretch out his birthday celebration.)

I mentioned how I was feeling to Mike, and to my surprise he felt the same way. That's when I realized.... when someone dies young they will always be the age they were when they left this world. Austin will always be carefree and 21, still figuring out where life was taking him, still figuring out what he wanted to be "when he grew up". And this is why, the days my other two boys turn a year older are a reminder that Austin will be "forever 21" (21 years and 9 months to be more specific).

A couple months ago, as I was watching my middle son, noticing how much he has matured physically this  past year, a thought hit me, "When Austin's younger brothers pass the age of 21, turning 22, then 25, 30, 40..., will Austin, in my mind, go from being my oldest son to being my youngest?"  Because, there will now come a day when Austin's brothers will enter years Austin never experienced. They will experience things Austin never got to because he never made it to that age. Over the years, I have always related where my two younger boys are with where Austin was at various ages. For example, when one of them was getting up every night in the middle of the night, I would think "I remember when Austin didn't sleep through the night. He eventually did, so I know that time will eventually come for this one too..." Or, when one of the boys was testing the limits I would remember Austin did that too, and we made it through. So there's hope!

A few weeks ago we were at a wrestling tournament. Starving, I walked to the cafeteria to grab a bite to eat. As I entered the seating area I noticed my 14 year old sitting with his friend at a table. I purchased my food and proceeded to find a place to eat, making sure it wasn't right next to the boys. You see, my son is at the age where it is not "cool" to have your mom sit with you when other kids are around. I could have tortured him, the thought even flashed through my mind briefly, by plopping myself down in the seat next to him - but decided to be nice, for once, and give him his space. He saw me sitting alone, but never offered me to join him.... yep, he's definitely 14!

As I was enjoying  my nachos, watching my son and his friend, I smiled remembering the years that Austin was just the same - when we were out in public and I walked into a room he and his freinds were in, Austin purposely avoided eye contact, hoping I wouldn't walk over and embarrass him. Then, my mind fast forwarded to 2010 Memorial Day week-end, when Austin actually invited us to join him at a Memorial Day gathering. When we walked up the driveway he didn't turn his head hoping we wouldn't see him, but rather he came out, greeted us with big hugs and introduced us to all his friends.... yep, my 14 year old son will grow out of this phase, just like Austin did!

Austin will always be my first-born son, but he is now "forever 21"!
Posted by Lori Narewski (Austin's Mom) at 10:31 AM No comments: