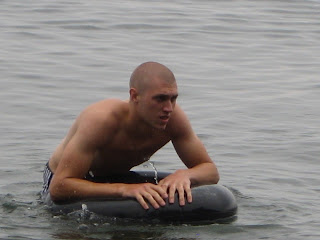 That was a mini-conversation I had with my middle son the other day, after a fun week-end with one of Austin's friends.

Right after Austin died, the outreach from Austin's friends was amazing. I think I've mentioned it before, but it's worth stating again, I was blown away by how much his friends just reached out to us to let us know they were thinking of Austin and of us. Some we had known since childhood, others we had just met at the calling hours and funeral, some we had never met in-person (but have heard their name from Austin in the past).

Austin's friends goof with my other two sons as though they've always known them and my boys soak it in. My sons feel a part of Austin through his friends and love it!

I don't know if Austin's friends realize they are a gift to us from Austin. Every single one of them, whether we chat with them once a month, once a year, or only one time ever, is a gift. Every one holds a piece of Austin and gives us a glimpse, a reminder, of who he was. We are blessed to have been given this gift from Austin.

To all of Austin's friends, thank you for sharing Austin with us! It means more than words can say.
Posted by Lori Narewski (Austin's Mom) at 5:00 PM No comments: