"No matter where you choose to be, In my heart I'll always see you....Everywhere" Lyrics from Everywhere/Tim McGraw 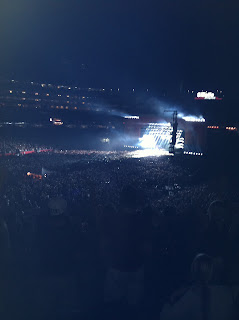 Music did it again, helped me put what I've been thinking into words. At the Tim McGraw/Kenny Chesney concert last night, I knew what songs would make me think of Austin, or so I thought. Tim McGraw started singing a song I've heard a thousand times. It's one about a guy who can't forget a girl he used to love. They had made the choice years ago to go their separate ways, but for the guy, the girl is still in his heart - no matter where he goes, he can't forget her and who she used to be. That's what I've always thought about while listening to the song.... until last night.

While sitting in the stands at Gillette Stadium, with the warm breeze blowing, people all around swaying to the music, singing along, tears began rolling down my face - those darn "Sneaky Tears". Here are the words I heard last night:

We (You) were born in this little town.... But ever since you said good-bye... Baby (Austin) you would be surprised...All the places you have been...In my heart I'll always see you... Everywhere... Now days... The conversation always turns to you... Still I know I'll hear your voice... And see you down the road... you're on every highway just beyond the high-beams... In my heart I'll always see you EVERYWHERE... words from the Lyrics of "Everywhere"

This put into words, what I have been thinking over the past couple months....

Things have been changing, once again. My life is getting busier. I'm finding I can handle more and more, the way I used to before Austin died. The pain and sadness has softened - become quieter. But one thing has stayed constant. No matter where I go, I think of Austin. No matter what the conversation is, my mind wanders to Austin. Austin is with me... EVERYWHERE!

Because he's always in my heart. And that will never change.
Posted by Lori Narewski (Austin's Mom) at 5:49 AM No comments:

"There really is 'healthy fear.' For example, it's very healthy to fear drinking before you drive. However, fear should not be allowed to run rampant through our lives so that it becomes such a devastating factor that it produces failure. The problem is not getting rid of fear, but using it properly.... We must learn to distinguish those helpful fears from the harmful ones. When you can do that, fear is a friend. Until you can learn to do it, however, fear can be an enemy." ~ Zig Ziglar

I have been sitting on this entry, writing and rewriting it (both on "paper" and in my mind) for the past year and a half, as different events have stirred up feelings and I have to distinguish between the fear I feel - keeping my unhealthy fears at bay, while listening and reacting to the healthy ones.

A couple of winters ago I attempted to learn to snowboard, which I'm sure was an interesting site to see. I was an expert on the bunny hill, if I do say so myself. Then came the real test - the real beginner slope. I made it on the ski lift without falling. I made it off the ski lift without making a scene. I fastened the board on my feet and started down the slope. At that point, I think my snowboard had a magnet that was attracted to the trees. Every time I started to go, the board automatically moved towards the trees. No matter what I did I was still headed to the woods. The closer I got, the more nervous I became. Fear set in. I knew I was going to crash into a tree and probably break a bone. The more the fear set in, the more nervous I became and the more I froze. I could not control my board. My brother, being the patient younger sibling that he is, graciously helped me by holding my hands and guiding me down. Unfortunately, my legs slowly became fatigued and felt like jello. At that point I had to confess to my brother that I could no longer snowboard down the mountain. I had to take the snowboard off and walk down the slope. I told him that he could continue down by himself, so I wouldn't embarrass him as I walked instead of snowboarding. He laughed and said he didn't mind....

This was a healthy fear. If I hadn't listened to my instinct and what my body was telling me I, most likely, would have been seriously injured and/or taken out and injured some innocent skier as I tumbled down the slope, out of control.

Then came my dilemma. My boys learned how to snowboard that day also, the same time I did and with the same instructor. They were up on the mountain, snowboarding and having snow ball fights. Part of me was very proud of them, but the other part was nervous. All I could envision was them crashing, out of control, into a tree. Should I let them continue? Would they get hurt? Would they be the next person coming down on a stretcher, pulled by the ski patrol? Possibly. But, I knew they were much more coordinated and a lot more fearless than me, but were they safe? Yes, they could fall and get hurt, but they were in good hands. I decided to, as Zac Brown says, "Let it go."

If I had listened to my fear, I would have been doing the boys a disservice. The boys were in good hands, learning how to snowboard and enjoying the day. Yes, they could fall and get hurt. But, more likely, they would learn how to snowboard, have a great time, and make memories that would last a long time. Of course, they would also find a new activity to beg me to do every time it snowed or they were bored during the winter. They better find a way to earn money to buy a snowboard and ski lift passes.

As a mom I worry. This started the day Austin was born. Some of my worrying was justified, some was a result of an overactive imagination and had to be ignored. This continues today with my other two boys, but to a further degree. I have now experienced what is every mother's fear. I know what can happen and have to ask myself, "Am I being over-protective or realistic?" "Is this something I should let the boys do, even though there is risk? Or is the risk too high that I need to say 'no'?"

Life is a risk. There are things we do where we could get hurt, physically or emotionally, but it doesn't mean we shouldn't do them. Our challenge in life is deciphering what fear we should listen to and what fear is unrealistic.... To really live, we must face some of our fears. To not do so would deny ourselves the life we were meant to have!

(I hope to write about some of these fears in the near future - but seeing how it took me over a year to finish this entry, we shall see...)
Posted by Lori Narewski (Austin's Mom) at 3:56 PM No comments: