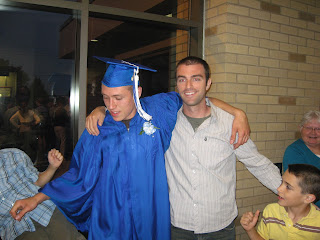 The other day I was chatting with someone about class reunions, commenting on how it's hard to believe that I graduated from high school 28 years ago.... unbelievable! So much has happened between then and now, yet it doesn't feel like it's been that long. I truly don't feel that old.

During the day of calling hours, the fact that Austin was dead was still surreal. As I watched Austin's body lying in the casket, a thought kept popping in my head, "Wouldn't it be crazy if he suddenly sits up, says 'Boo! Just kidding...' and then laughs." Because that was Austin, always up for a good prank.

Only this time it wasn't a joke. And it's hard to believe that it's been almost 2 years since I said good-bye.

Today was one of those "Austin days," the kind of day I mentioned in an earlier blog (3/23/12... Just Like Yesterday). No matter what I was doing I kept thinking, "OK Austin, you can come back - anytime now. Jokes over...." Only I know it isn't a joke. He isn't coming back. Sometimes it doesn't feel like the calling hours and funeral were almost 2 years ago (22 months, 2 weeks to be exact). 22 months! Unbelievable.....

I wonder if this is how I will feel in 26 years, when Austin has been gone for 28 years. Will it seem like just yesterday? Will it still be hard to believe?
Posted by Lori Narewski (Austin's Mom) at 6:48 PM No comments: