You Will Laugh Again

Over the past couple months a theme continues to pop into my mind. Sometimes it comes as a result of a song I'm listening to, other times it's when a vision from two years ago pops up, other moments it's when I feel a beautiful sunset warm me from the inside out or watch my sons being boys. Everywhere I've turned, recently, it's there.

I was chatting with one of Austin's closest friends a few weeks ago. We were discussing conversations we had both recently had with others who had just gone through a tragic loss and commenting on how two years ago we couldn't imagine feeling happiness the way we do today. Because, two years ago it seemed like sadness was all we'd ever feel. Of course, that wasn't true, but at that point in time it certainly felt that way.

Gary Allan, in his song "Every Storm Runs Out of Rain," says it so clearly, "Every storm runs, runs out of rain. Just like every dark night turns into day..." When this song comes on the radio, I turn it up and sing along, knowing the words are so very true.

A couple days ago I was reading an entry from someone who had lost a child and kept shaking my head, "Yes, yes, this is so true!" Because she was speaking to the theme that had been running through my head...

"'You will survive this. It might feel like you won't right now, but you will.' Those were the words told to me by a lady at my son's viewing. I later learned that her 4 year old son died ... about 9 years prior. You never would have known it. I asked her in the following weeks, 'Are you happy? I mean really happy?' She knew what I meant. You feel like there will never be another happy day, another smile, another joy. She said, 'Yes, I am. Of course there are days when I am not, but most of the time now, I am.'" By Sabrina Baptista (Letter to Newly Bereaved Parents)

Even as I read these words again I smile, because every day I see and feel the joy and love of life creep more and more into my life. This year at Thanksgiving dinner, it was just my husband, my two other sons, one of my brothers, and myself. I was at one end of the table, my husband at the other, my two boys were on one side of the table, with my brother on the other side. As I looked at the side where my brother was sitting I could "see" Austin sitting next to him, I could feel my heart missing Austin. Then something was said that got my two other boys laughing and laughing and laughing, they couldn't stop. When it was finally quiet one of them would start laughing again. It was one of those laughters that you couldn't help but join, even though you didn't know what they were laughing at.

That persistent theme popped back in my mind.... You have survived! You will feel true joy again (even while while simultaneously missing Austin), because "Every storms runs out of rain.... every dark night turns into day...."

What were the boys laughing at? Me.... My youngest son had done something that made him laugh.The way he was laughing I thought he had said or done something inappropriate, so I asked him what he did. He said he couldn't do it again because I would get mad. I said, "Do it...", then he started laughing again. I responded, "I'm serious, I want you to do it again." To which he was quiet for a second and then he started cracking up again. My husband just sat there with a smirk. My son finally told me what he did.... he had farted (which I get mad when they do it period, let alone at the dinner table). So, every time I told him to do what it was he had done(that I wouldn't be a happy about), he simply obeyed and "farted again", then giggle away.... He got me there, he was only obeying.

Laughter filled the room.... I had much to be thankful for..... all I had to do was look around the table and smile.... and I could hear Austin laughing right along with us. 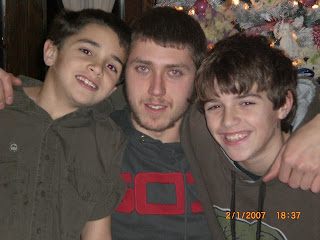 Posted by Lori Narewski (Austin's Mom) at 1:54 PM No comments: